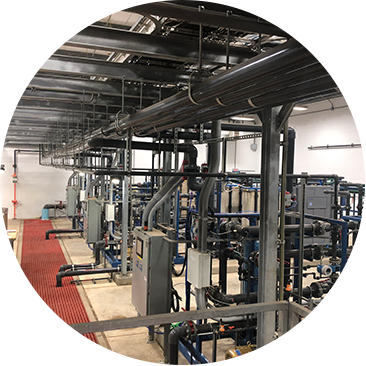 OJD Engineer Michael Adams says “Wolfforth kind of blazed a trail, “We had to do it here, we had no choice, but it’s going to benefit other cities.” Just minutes before he left to turn off the electrodialysis reversal water filtering test system, an engineer working with the city of Wolfforth said the pilot test of the system had gone even better than city officials expected. The city conducted two straight 30-day runs of the system to test how it will work with Wolfforth’s water. Michael Adams of OJD Engineering said officials from General Electric will be arriving in Wolfforth the second week of May to decommission the test electrodialysis reversal unit and haul it away. They will also work with city officials in design meetings for the city’s permanent test structure.

Adams said the test unit ran 24 hours a day during the most recent 30-day testing period, using about eight gallons per minute. That water went into the sewers, he said, because it is not yet approved for use by the Texas Commission on Environmental Quality. But Wolfforth is one of the first cities in Texas to use the EDR system to filter impurities such as arsenic and fluoride from its water, and Adams said TCEQ has agreed that other small cities can use Wolfforth’s data and that of cities in other states in the future rather than running a costly pilot test.

At OJD our broad range of professional experience in both civil engineering and surveying disciplines specialize in serving the needs of clients in government, business, manufacturing, construction, energy, and land development.

To make your projects successful, you want smart people who work hard to develop elegant solutions to the problems they encounter. You want people who understand your needs, share your vision, and will dedicate themselves to your goals. That’s what we do. That’s who we are. Put us to work and we’ll show you what a Benchmark firm can do for you.